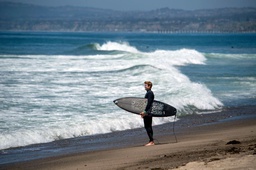 Chris Bennett would rather be surfing than running…but he’s got good reasons to run the AF Canyon Run Against Cancer. (And only one of them is to beat his brother-in-law).

Chris Bennett is an athletic guy…but surfing is his sport of choice. He has bad knees. He’s never run a half-marathon before. He doesn’t even like running, to tell the truth.

And yet, he’s going to run AF Canyon Run Against Cancer half marathon this year. He’s got his reasons. For example, 97thFloor — the company he’s CEO of — is the title sponsor of the event. And more importantly, he’s got a plan for beating the COO of the company through some very intense training.

And most importantly, he’s doing this race for a reason a lot of us can identify with: cancer has hit too close to home, too many times.

Listen to our conversation with Chris on Apple Podcasts or Google Play, or listen to it right here:

Running for the Reluctant

Chris is an all-around athlete, having run several 10Ks and obstacle races, but surfing is what he really loves. This will be his first half-marathon, and he is not a fan of long runs. “I have bad knees from basketball, so the less long-distance running I can do before the race — but still be prepared — is what I'm trying to shoot for,” he says.

Chris is using intensity — not a lot of long runs — to prepare for the race. “I'll be doing a lot of sprints and a lot of weighted stairs, weighted walks and things like that,” he says. “When I run on the concrete for a long time, I definitely notice my knees. So I'm going to try to just show up [to the race] in good health and without my knees already hurting. I think that will be a win in and of itself. “

Chris isn’t too worried about the “race” part of the AF Canyon Run Against Cancer. When asked about his hoped-for finish time, Chris says, “I don't even know what a good finish time is. I'm so far removed from that world.” 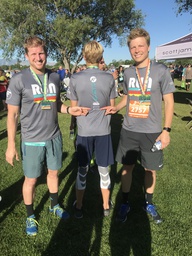 So, since Chris is not a huge fan of running, how did 97th Floor — the company he’s CEO of — become the title sponsor of the AF Canyon Run Against Cancer?

“I grew up very lucky,” says Chris, “not having any cancer stories close to me. So for a while I kind of escaped that.

Like most people, though, cancer eventually touched his life. “Right before my wife and I got married — about 15 years ago — her Dad was diagnosed with stage-four prostate cancer. I mean, he was given weeks. He got into eating really healthy, and we got him a lot longer — almost a year from what his diagnosis was," Chris says. "He got to see us married, he got to walk my wife down the aisle, and we're very grateful for that time.”

“And then my father also got prostate cancer,” Chris says. “He was lucky enough to find it very early on, pre-stage one and had surgery and has since been cancer-free for about five years. So I’m very grateful for that.”

But cancer has definitely hit close to home. And that’s a big part of why 97th Floor not only supports this event, but also donates part of its “One Percent” initiative — where 97th Floor donates one percent of its gross income to a charity of its employees’ choosing — to the AF Canyon Run Against Cancer.