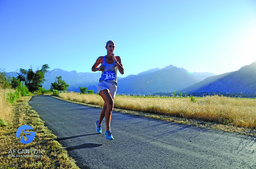 Jane is fast. Really fast. And the AF Canyon Run Against Cancer is her very favorite race…but not because she’s finished on the podium

For most of us, events like the AF Canyon Run Against Cancer are all about completingthe distance we choose. The victory comes in the form of crossing the finish line at all, or perhaps in finishing with a personal best.

There are a few people, however, for whom this is truly a race. Jane Durfey, a three-time podium finisher, is definitely one of these few.

Even so, however, that’s not why this is her favorite race. Not even close.

Listen to our conversation with Jane — including some valuable advice on how to have a successful run — on Apple Podcasts or Google Play, or listen to it right here:

As far back as she can remember, Jane had a competitive streak. “As a kid,” she laughs, “I was always the first one to the drinking fountain. I raced on the playground, and then sat there at the drinking fountain for a long time and didn't let anyone else get a drink.”

Growing up, she knew she was fast, that she had a talent. Holding several records in the hurdles, Jane says, “I didn't always love running, but I knew that I was good at it,” Jane says. “I knew it was going to pay for college, so that was a motivation.”

And that was in fact the case. Utah State gave Jane a full-ride scholarship, where she was a sprinter…a very different kind of distance and effort from the long-distance running she’s doing now. “It's been an evolution,” Jane says, “trying to switch over to long-distance running. But when you're 40 you can't sprint very well. You have to make do.”

Although most people would agree that finishing on the overall women’s podium each of the three most recent years of the race is not exactly “making do.” 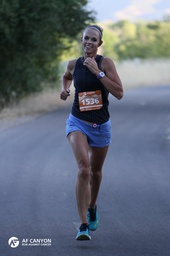 As an experienced runner who knows the AF Canyon like the back of her hand, Jane has a number of great tips for anyone who’s running this half-marathon:

Jane runs several marathons and half-marathons per year, but says that without question, the AF Canyon Run Against Cancer is her favorite. “It's there in my backyard. [My running friends and I] were in the canyon just this morning — so we run it all the time. We know every turn, every slant in the road, so we love it.”

As she talks about her running, Jane almost always refers to “we,” not “I.” “It is a social thing,” she says. “We meet a lot throughout the week— every Saturday, Thursday, and Monday.” And it’s not just a “run if you can keep up” kind of group, either. “We have people running at all paces,” says Jane. “It’s definitely not an elite group. I think that it's important — especially for women — to find their niche, to find people they have things in common with.”

There’s a big payoff for training together like this. “It's very emotional,” Jane says. “And that's why I do it. I love to run, but even more, I love what it brings out in people.”

Even beyond the racing and social aspect of running, running has a spiritual aspect for Jane. “It’s very spiritual to me,” she says. “I've had answers to prayers many times on a run. So it's not all about pounding the pavement for me.”

“Don’t get me wrong,” she says. “I love the feeling of running fast. it's motivating and I get a sense of accomplishment, but that's definitely not my driving force of why I run the AF Canyon Run Against Cancer. I appreciate the signs. I love seeing people that run it for the first time. It's my favorite thing to see someone come across the finish line where maybe they thought they could never do it before, or are struggling themselves, or they know somebody that's struggling with cancer.”

“This race wouldn't be the same,” Jane says, “if you don't have a real reason to do it.”