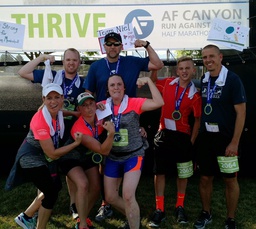 With the help of a good brother, Teresa started running to move past a bad situation. And now she’s paying it forward.

It was the Spring of 2015, and Teresa was not doing well. “I was going through a difficult, painful, heartbreaking divorce,” she says, “and I was wallowing in self-pity and self-doubt.”

Teresa’s brother, Adam, thought what Teresa needed was to challenge herself. According to Teresa, Adam said, “You need to figure out who you are. You need a challenge; you need something that's going to push you to your limits and really help you find that inner strength again.”

“There's nothing else that will help you do that,” said Adam, “except for running.”

“I just laughed in his face,” says Teresa. “I hadn’t run since junior high PE class.”

Now — years later and having run multiple half marathons, Teresa thinks that Adam was right. And she’s paying that important insight forward in a big way.

Listen to our conversation with Teresa on Apple Podcasts or Google Play, or listen to it right here:

There are a lot of good reasons to run the AF Canyon Run Against Cancer. The cause — raising money to help people currently fighting cancer — is a great reason. The extraordinary view is another.

One really great reason that tends to get overlooked, however, is running this race for yourself. Teresa’s story, however, is a great example that the experience of training, running, and completing something new and difficult can make a difference in your life.

Getting help from someone who cared about her was an important part of this transformation.

“Running and preparing for the first half marathon gave me focus beyond what was going on in my own personal life,” Teresa says. “It told me, ‘if I can do this really hard thing — running — I can also do this other really hard thing — getting divorced. It just completely changed my focus and helped me push through it.”

“It was really hard,” Teresa notes. “It definitely pushed me to my limits, but I did find that inner strength.”

Teresa doesn’t just run in the AF Canyon Run Against Cancer; she also has made time to volunteer for it. “I chose to help with packet pickup,” says Teresa, “because you get to see everybody come through the line and talk with them and hear their stories.”

“Plus,” Teresa says, “I’ve never seen more hardworking volunteers than I have at this race. There are some people that don't even sleep the night before because of the setup, and they're just exhausted and that's inspiring to see. They're doing this for such a great cause. You get to be a part of it, you're seeing the behind-the-scenes action, and it's been really fulfilling.”

A Little Help From Her Family

It wasn’t just her brother Adam who joined Teresa in her transformative first half-marathon. “He got my entire family involved,” says Teresa, “and that first year I had two sisters run it with me, two brother-in-laws, a nephew, and Adam."

“And then in the last half mile of the race,” Teresa says, “My boys, Taylor and Zack, found me, running alongside in the audience, just hooting and hollering and cheering us on and making us laugh…and making me cry.”

For each of the following two years, different family members have joined Teresa, taking in the unifying and empowering spirit of the event. Teresa notes that they have a tradition of sticking around at the finish line, where she likes to see the look on others’ faces that she has felt by doing this herself — and with her family.